Denise and I are hoping to show some of our work at the upcoming Dublin Maker event (July 26th) and as part of the submission process I’m putting up some images of the work in progress to give the Dublin Maker organisers some idea of what we want to share and show.

I’ll be testing them in the museum before July 26th, so it’ll have come through the ‘work-in-progress’ status at that stage and be working. (Hopefully :P )

The idea is that someone churns to participate in a novel experience with an authentic churn. In the final piece all of the technology will be hidden.

A quick breakdown of the system: 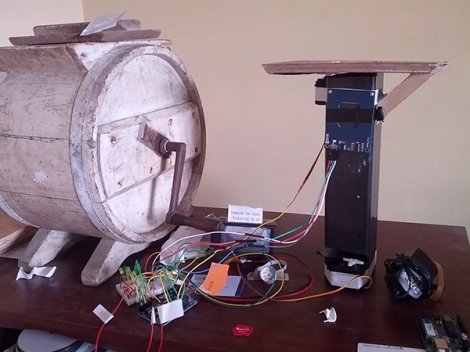 So, on the left we have the churn, and the thing on the right is a pipe. The pipe has an RFID reader onto it, which reads the tokes. It also has servo motors attached to it, which controls the flow of tokens through the churn.

If you want to find out more about this particular prototype, just look through the rest of my blog.

Here is a video of the whole thing working that I took a few weeks ago…I’ve changed a few things since then..